Looks like Citi Bike might as well change their name to “Shitty Bike” HAHAHAHAJAJA SO FUNNY. But seriously: The company is apparently “scrambling,” “bleeding” and “hemorrhaging” due to the fact that it needs tens of millions of dollars from private investors to continue being the summer of 2013’s most tired meme.

WSJ reports that while Citi Bike is successful in certain neighborhoods and remains popular with locals who use it as their main mode of transportation, it’ll need to attract more tourists and expand to more neighborhoods. 99,000 riders have $99/year memberships, but there’s much more money to be made through daily ($9.95) and weekly ($25) passes. Other issues facing the bicycle-sharing company: equipment damage from Hurricane Sandy, a glitchy payment system and our current winter, which appears to be permanent. 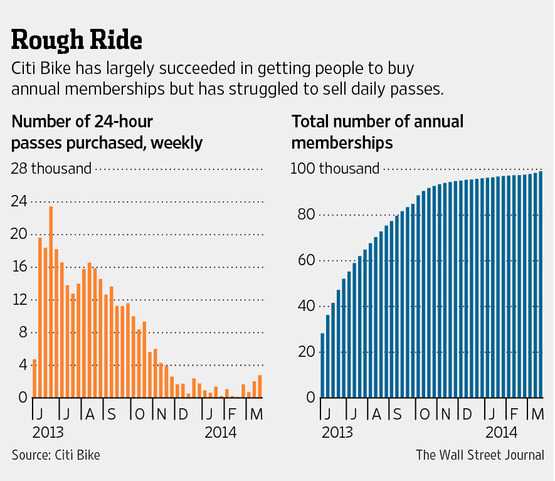 Is it strange that, although I have never ridden on a Citi Bike, I would be sad to see it go? Once, my friend met this really hot actor at a bar and at 3am they drunkenly rode a Citi Bike over the Williamsburg Bridge. Other people need to experience that, too!

This is where rich people and/or the city should step in. City Councilman Ydanis Rodriguez, the chairman of the transportation committee plans to introduce a bill that would require city to provide financial reports for Citi Bike, but why doesn’t the city partially subsidize it? Bicycle-sharing programs in most major cities, like Boston, Chicago and San Francisco use public funds, why not here? (Because Mayor Bloomberg was not down with that.) Well, we’ve got a different one of those now. *Cough cough.*