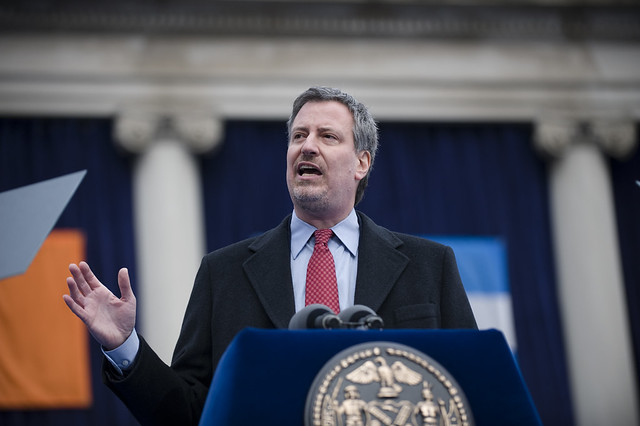 Today, we’ve learned that 15 neighborhoods will be rezoned to kick off the as-yet-unnamed housing plan (Vision Forever Home? DeBlasio Domes?) and the first pick will be in Brooklyn.

According to Capital NY, East New York is up first with each subsequent rezoning being tailored to the neighborhood. We take that to mean that neighborhoods with the most potential for growth (i.e. they can handle more residents) will be targeted, which is pretty much how Borough President Eric Adams laid it out a week before the announcement of Mayor De Blasio’s plan.

The rezoning would be an integral part of De Blasio’s plan to create or preserve at least 200,000 affordable housing units over the next ten years. By rezoning, the City Planning Commission can turn sections of the city into “mandatory inclusionary zones,” or sites that would require potential developers to include a certain amount of affordable housing in large scale developments before approval. (Though Capital now reports that “that one particular model of mandatory inclusionary zoning—the proposed requirement that new buildings include a certain percentage of affordable units—[may not] be applied everywhere.”)

Is that backpedaling we spy? Only time will tell.

On top of that, there’s the private sector’s (i.e. developers’) willingness to cooperate, which has always proved to be a major hurdle for any housing plan. In that vein, City Planning chairman Carl Weisbrod told the City Council that the plan can’t be rigid “to the point where the private sector is not going to invest the capital. So finding that balance is something we are going to have to look at on a neighborhood-by-neighborhood basis.”

The De Blasio administration plans to release the list of targeted neighborhoods over the next few months and we will not be even slightly surprised if a good chunk of them are in Brooklyn. After all, we have all this space and a population that’s growing exponentially.

We’ll share more updates on the burgeoning plan as they become available.