We recently made the case that Brooklyn–as a concept, as a city, as a phenomenon–will never, ever happen again. We are a unique snowflake of a borough. But! If we were to say that there are other Brooklyn-like places out there, then one of them is definitely Portland, our weird cousin to the west.

This week, they’ve truly out-weirded themselves and made history as the first city where craft beer outsells both Anheuser-Busch In-Bev and MillerCoors.

According to Beervana Buzz via Craft Beer News, craft beer now holds a 45.8 percent dollar share of the beer market in Portland. Meanwhile, Anheuser-Busch and MillerCoors have seen a 2.1 percent drop in their combined dollar share and now hold only 40.6 percent of the Portland beer market. 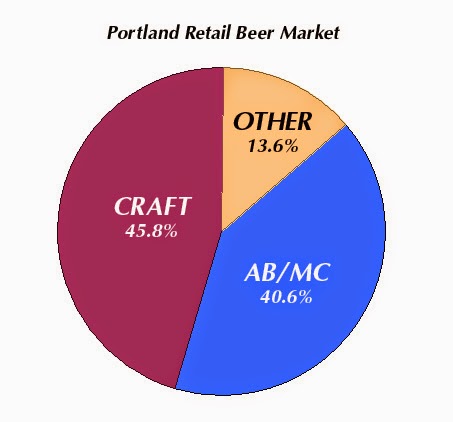 As Beervana points out, these numbers only represent retail, or what’s being bought off the shelves. Imagine the draft numbers these craft breweries are doing on the side.

And as we all know, this is part of a larger sea change. It’s only a matter of time before the same thing happens here.